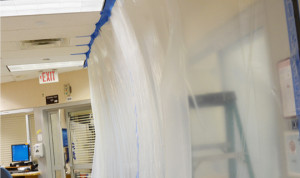 Every year, thousands of people lose their lives because of the spread of infections in hospitals. Even though staff takes every precaution to avoid infections, these problems still occur. Hospital acquired infections (HAIs) are an ongoing danger for patients and may increase morbidity, extend hospital stay, and require additional medication. At any given time, more than nine percent of patients have an infection acquired in hospitals.

Statistics indicate that one in 25 patients develop hospital acquired infections. This type of infection occurs two or more days after admission into hospital or other healthcare facilities. It is estimated that more than 1.7 million HAIs occurred in the last 15 years, from which 99,000 have led to death of patients. Most people develop urinary tract infections, bloodstream infections, clostridium difficile infections, surgical site infections, bacterial infections, and pneumonia during hospitalization.

All healthcare facilities have infection control procedures. Even so, these problems are extremely common and affect patients of all ages. In 2011, approximately 722,000 people developed an infection while in the hospital. More than 75,000 of them died because of it. This means that hospital acquired infections kill over 205 patients every day. It’s no wonder why infection control is a growing concern for hospitals.

How Dangerous Are Hospital-Acquired Infections?

This problem costs the U.S. over 9.8 billion each year, and represents a major burden both for the patient and for public health. Hospital acquired infections occur in developed and resource-poor countries alike, especially in the South-East Asia and Eastern Mediterranean  regions. The highest prelevance is in acute surgical wards and intensive care units. Older patients as well as those undergoing chemotherapy face the greatest risk.

Nosocomial infections increase the emotional stress and functional disability of the patients, worsening his symptoms. Many times, they can lead to disabling conditions that affect quality of life. The development of hospital acquired infections is influenced by various factors, such as the exposure to viruses, fungi, and bacteria, poorly maintained healthcare settings, waterborne bacteria, patient susceptibility, and bacterial resistance. At the same time, antibiotics are becoming less and less effective.

These health issues may also occur when health care providers don’t practice good hygiene regularly. For example, nurses move from one patient to the next, spreading pathogens. Viruses and bacteria can be also transmitted to the patient by contaminated items, such as medical devices, water, food, and drugs. Rats, flies, and mosquitoes may cause infections too. Although there is no way to prevent hospital-acquired infections altogether, it is possible to reduce their occurrence by implanting quality assurance and quality control measures to the health care sectors.

More about how to deal with infection control at http://orange-restoration.com/additional-services/san-diego-infection-control/